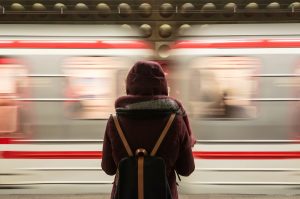 Extract from “Wounded: The Journey of a Nameless Woman” by Waírímú K Warobi©

It was an early Sunday morning in November 2015, the streets were quiet and there was no activity. The sky was grey in London; the beginnings of winter cold crept in. The morning fog was heavy, and no doubt everyone snuggled in a bit deeper under the duvet, hoping they didn’t have to go to church that day.

I stepped on to the balcony to search for the London eye, I couldn’t see the wheel. The light and dark seem to mingle together as the morning struggled to wake up. If it were not for the fog in my head, the crisp morning and fresh air was good for the soul. “Lord winter mornings are hard” I quietly spoke to myself.

I had taken a few days of from work. The pressure of walking to and from work in the cold was too much. The pain was excruciating it run from the base of my neck as my nerves radiated and pulsed, I softly whisper through the tears “neck please stop”. I had learnt to be the Pain Whisperer to my body, as I gently rocked from side to side. Muscles tensed from being moved and they were in pain. I had plantar fasciitis, an inflammation of the plantar, meaning early mornings were a nightmare, bearing weight on my legs was hard!

My hips were burning like small flames of fire had been lit on both sides and my sciatic nerve on both sides pulsated and stabbed like there was no tomorrow. My butt muscles tensed and I was not sure if it was a swollen muscle or inflamed muscle, I could barely walk. “What has become of me?” “This is not the life I wanted to continue with”. It was relentless pain for 3 years! The thought was one that came and went, not often but it hovered during the bad pain days. “I had a good 50 years to go and my independence was slowly being drained out of me”, the invisible conversion continued.

“Of what use is it to help people”. The tears rolled down my eyes, it was today I wanted my life to end. Weeks of depression, erratic eating and long hours of sleeping had taken it’s toll. The physical and emotional pain was too much. I couldn’t have children, of what use was I? I had a physical illness that had no cure and no clear prognosis that had drastically changed my life. I grimaced as I tried to look through the fog, it felt like my head, woolly and grey.

I felt the chill in my bones and stepped back into my lounge. I felt the pain in my chest and the unshed tears started pouring again, deep subs racked my soul, I had nobody. I thought of the many people who I thought were friends, “call me if you need help”, “I’ll be there for you”. There was a place, a physical location, I thought “in my house”. Diaspora was cruel, our relationships were freaking superficial, if you had no family and if you were not in the christianese group, you were alone. I berated myself for helping others, then the second thought came, “No you don’t”.
I walked into my bedroom and climbed into bed. The early morning shifts to take medication, meant I never got proper sleep. I waited for the medication to kick in. I wept for my parents as I curled into a foetal shape with my back against my leather breadboard. This is a habit that I had adapted for a while, I had the bed to accommodate me. I thought of my parents being told, or newspaper headlines of a woman who had jumped in front of a train.

I closed my eyes and walked to the station. I imagined walking through the shopping parade. Touching the glass and looking at the mannequins prepared for the Christmas shopping sprees. Inspite of the madness going on in my head, I smiled at the Somali security guy, who greeted me everyday and asked where I was if he didn’t see me. I sat for a few minutes at my bench with Costa coffee directly opposite me, I smiled at the meets that I had since I got sick. I thought of Ken and our monthly meets to have debates, he would be shocked. “He would miss me”.

I took the short route to the train station, through the dark parking lot, out into the grey quiet street. I could still see the fog and visibility was low. I calmly walked into the station dressed in my normal jeans, my favourite hoodie covered by my favourite leather sheepskin lined jacket. I had my favourite Nike trainers and my hat. I love hats. I went and bought a ticket and walked through the gates. I got a coffee and sat waiting, waiting for a train.

I sat as the Sunday traffic started, people going to church others to the city for the day. Everyone was wrapped up warm and others the cold didn’t seem to affect them much. I watched the Africans in African outfits, I couldn’t differentiate the Eastern Europeans,I watched them and smiled softly, “If only they knew”. “If I was lucky there would be one of those train’s carrying cargo that fly through the train station non-stop” leaving no room for error.

Suddenly I got up from the seat, wondering “Wairimu what the hell is wrong with you, have you no fear of God?”. The conversation continued “will you chance heaven for hell?”. I know the answer as I got up and walked back to the ticket gates, put in my ticket and walked out smiling at the ticket man who couldn’t quite figure out, had I left the station or not.

I suddenly got up from my bed, wondering “how bad is it mama,” you can fight through this, “had you not gone through hard stuff and come through shining.” I went into my bathroom, had a shower and decided I need to talk to someone, I called Samaritans. I dialed the number “Hello my name is Miss Warobi, I don’t want to go on” , just hearing my voice aloud I knew I would make it.