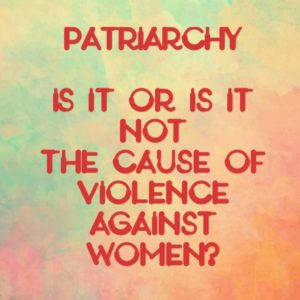 There is a thought being perpetuated that patriarchy is the cause of violence against women. I have been brooding on this thought for a while.

It is shortsighted to think men do not suffer domestic violence. Domestic violence knows no gender, we have somehow confused  gender to signify only female, yet boys and men experience and observe this behaviour globally. Separately in the case of violence e.g. war women feel the effects just as much as children and men; women and children are displaced and many times raped and men often go to war, get killed or dont participate and end up being killed inthe brutuality of war.

By definition patriarchy “is a form of social structure in which the father is the head of the family, clan, or tribe and descent is reckoned in the male line. … a community in which the father or oldest male is the authority, and descent is traced through the male line”. Whilst I have little experience matrilinial families, my understanding is that the children belong to the mother, but the father still retains headship. To understand matrilinear/matriarchy, I picked my phone and called George Koomson, a senior journalist from Ghana, as we had had a conversation many moons ago. Born Fante he confirmed that even though matriarchy was the system followed, the headship belonged to the Father. I don’t know if it is different in other tribes, but there seems to be a consensus on the headship of the man.

Being kikuyu with an errant 3 generation tribal mix, my family is patriarchal and that generation was polygamous. A different time, a different economy, a different way of thinking. I must confess I was a bit disgruntled when my brother became head of the family, but looking deeper into the issue, I am the first born and emotionally felt displaced. My brother being the head makes no difference to me why? I know my brother brings more sense to the table on some issues than I do. Knowing my parents as foward thinkers, marriage has never separated our DNA and our involvement in family matters.  In Gikuyu tribe of Kenya, the first son takes headship and leads in matters pertaining the family welfare, inheritance. The unmarried girls get inheritance to ensure their security when their father dies. The married girls could be gifted however the theory is they had moved house why inherit twice sounds fair to me?

Fast forward in Kenya the new constitution has allowed for all to equally inherit, no small fete by activists who worked hard in a dominant male parliament. The law is facilitating the assurance that women inheritance is equal. On the other side family court is over flowing with cases to last God knows how long to haul in men who abdicate financial responsibilities to their child.

I am no anthropologist or graduate of that field, I picked up Facing Mount Kenya The anthropology of the Gikuyu. I don’t agree patriarchy is a political system, but a way of thinking that spilt over into economic places. In a world dominated by men, the fight for equality still goes on. Even in the UK the fight continues for equal pay!!

Politically the female vote is 60-70%representing the power of the woman’s vote, yet it is not felt even with the nomination of representatives.  It is only in Rwanda there is a large propotion of female representatives interestingly representation is this is even larger than the USA.  In the city it is likely that the urbanite has a higher chance than the rural woman in the opportunities afforded in the city. The rural woman could be CEO in the market place, farming etc and it is shortsighted to measure the role of rural women building economies by the plaque on your door or the alphabets after your name. There are cooperative groups that are financially savvy that come together and change homes, build homes for themselves and projects, have extra homes sold to off set loans.

There is also the silent economy that probably is not recognized or paid, the house wife.

There is a woman Wangu was Makeri who allegedly ruled over the Gikuyu tribe. It is said that men were treated so badly, they plotted to get all their wives pregnant at the same time. The government was overthrown and men led the tribe. If this happened today, we would be yelling “matriarchy is the cause of violence against men”. I would hope!  In the next few months it is likely the leader of the “free” world, the United States of America could be a woman, across the pond we are looking at the same phenomenon where the United Kingdom could be led by a woman”.  What will these women do differently to protect women or men?  Nothing methinks.

The greatest contradiction is the religion you follow. We hear constant teachings of submission to men, yet those who read the bible know it is a two people fete. The bible says man is the head and each has a role to play. Are you saying then we change the system to matriarchy? That will not change the situation of abuse as 1:3 men suffer or have suffered some form of abuse from women. SO, MAN IS EITHER THE HEAD OR NOT? Preach water, drink wine, a saying I learnt from my sister. Just as the rudder is essential to guide the ship the captain is a necessity. It’s who is equipped to steer the ship well and working together

We are not weaker, at least mentally but physically yes. We are just capable as men but the opportunities perhaps in the boardrooms and promotion are harder to find. Woe betide you if you are black woman in some nations. My patriarchal great grandparents were polygamists yet many children were educated and left property ensuring each family was able to take of themselves. Is it not security we look for? One has to integrate a concept within their cultural values. The boardroom is now the farm 50 years ago.

Economics, technology travel, media culture changed and education facilitated the growth of the girl child. She is caught in 2 worlds tradition and new world of possibilities.  Yet, the sons we complain about are raised by women married and single who in some cases raise them with entitlement. Fact there are things a father imparts to a son, no woman can. I have observed in some communities the fathers are distant, leaving the boy child at his mother’s apron. I was quite horrified when a West African friend of mine referred to his son as “the boy”.  We have been busy advocating for educating the girl child, who is taking care of the boys? Absent mothers or fathers, each play a separate role in this malaise.

FGM existed and in fact it is known some women choose to undergo the knife not to be ridiculed by their peers. This is not patriarchy. In 1929 my late grandfather Livingstone Warobi stood up against FGM in the community, leading him to be almost ostracized. This is still going on supported by women.

A woman’s freedom comes with her understanding  of who she is and being able to make the right decision for herself and her family and her community being aware of the consequences of this choice. Abuse and DV has not just increased due the financial power the woman, or patriarchy despite the myth going around.

With regard to prescribed roles, I would not expect my daughter to be tinkering under the hood at the age of 3, she will be observing and picking up what I do. On the other hand if she wants to be mechanical engineer, go to daddy mummy has zero understanding.  If I have a son today, I’d be educating him on getting good grades, how to treat a woman, how to cook for uni, don’t get shot by the police, go to your dad or your uncle. A social structure that benefits all if properly understood.The older generation never worried about children being shot.

Abuse is high within men yet it is not reported why? Statistics also show on LGBT relationships abuse is 44% in men and 38% in women. Those are astronomical figures.

Rights means I am fighting for someone to give me permission to be me? Equal pay yes, inheritance yes, promotion yes, housing and jobs yes. Social issues that affect all.  The social structure B.C. cannot be blamed. This structure that existed even before the white man turned up wielding the bible. Until the last century did the word pass our mouths. Abuse is behavioral, observed and exposed in many cases. There has to be an underlying cause and that is what needs to be addressed. Abuse existed even in our families before the rights movement.

The solution to Domestic Violence will begin first with open discussions by those affected and also looking at the cause as this could also bring in Mental health and of course the after effects of domestiv violence.